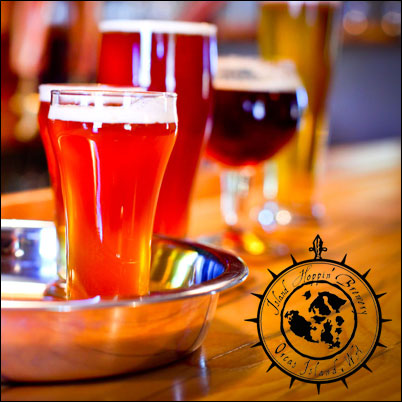 It can be challenging to have minimal environmental impact and create a great product from scratch on an island, but the folks at Island Hoppin’ Brewery are doing just that.

Orcas Island’s local brewery is big on reuse – from beer containers (growlers, mugs, barrels), to all the wood in the tasting room (repurposed island wood), to the tanks they use to make beer (old canola, grundy and dairy tanks), to the beer itself (yes, they can re-purpose beer… more on that below).

Remarkably, 90-95% of Island Hoppin’s final product goes into reusable containers—mostly kegs of various sizes. The 5-10% that doesn’t go in reusable containers is served in their tasting room in Eastsound. As is custom with many breweries, patrons can get growlers or jars filled with quality microbrew onsite. Steadfast supporters of the brewery can even join the Mug Club and have a mug assigned to them to reuse (and receive a discount) many times over.

Interestingly when asked about using recyclable aluminum cans, co-owner Becca Schons explained that is almost impossible for a small brewer. The Ball Corporation owns the patent on aluminum cans, and is the only supplier. There is a huge waiting list to get cans, and when you do you get the opportunity to buy cans you need to purchase (and store) huge quantities of empty cans.

Many other items from the tasting room are reused for other purposes. Paper boats (used for serving peanuts) are used for fire starters. Newspapers, magazines, and grain bags are used for packing materials. Other supplies like spent grain, hops, and yeast are fed to livestock or composted.

The spent barley grain is used for livestock feed, and the hops and yeast are used to create nutrient-rich compost that is given to local island farmers. This practice alone redirects about 7,500 pounds of material (about 150 barrels) from the waste stream.

The brewery has an arrangement with Mike’s Wine Bar on San Juan island to reuse their 55 gallon oak wine barrels. Wine cannot be made in the barrels after the first use, so Island Hoppin’ takes them to reuse in the production of their sour beers. Sour beers are aged beers, which have a tangy, cultured taste. There are many ways to age beer, and sometimes aging is the only option for the conscientious brewer.

Which brings us to beer re-use: One year the Island Hoppin’ pumpkin beer was not ready until the fall season had passed. So insightful brew master Nate Schons decided to put the beer in barrels, age it for almost a year, and then serve it during the following pumpkin season. Reused beer! Instead of beer going to waste due to lack of demand, barreling and aging it makes it a specialty product that is very popular and profitable.

One item they would like to find a better use for: 1,200-pound grain bags. The bags are made of a low-quality plastic that is not recyclable or durable enough to be sewn. If you have ideas or want to take some of the “super sacks” yourself, stop in at the brewery, order a cold one, and talk it over with the staff!